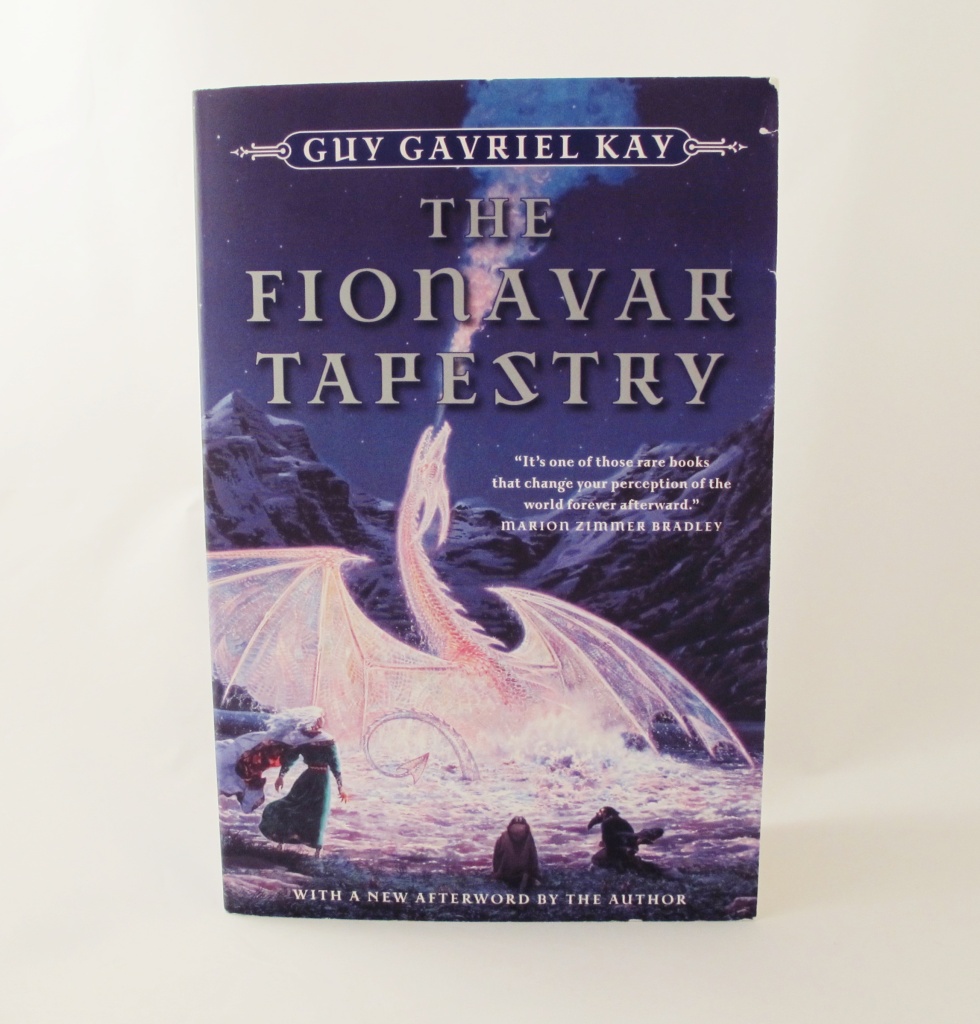 Title: The Fionavar Tapestry (The Summer Tree, The Wandering Fire, The Darkest Road)

Every book has a story: I’ve been a fan of Guy Gavriel Kay ever since I read Under Heaven and discovered the beautiful emotional devastation that could still be wrung from an epic fantasy narrative under Kay’s deft hand. Under Heaven was a random selection at the bookstore one day, so my discovery of the rest of the GGK canon came after; hence why I never got around to Kay’s first works until now. It’s almost inevitable now that each new Kay novel I read immediately takes a place among my favourite reads.

After the war was over, they bound him under the mountain.

The Fionavar Tapestry is among the dwindling numbers of portal fantasy stories—I can’t help but feel that if more people read it, then this particular sub-genre would make a roaring comeback beyond the realm of fanfiction. Literary, expertly crafted mythology and worldbuilding, and that incredible Kay ability to create a host of beautiful characters have made for a series that may be as dear to me now as Lord of the Rings.

University of Toronto students Kim, Kevin, Jennifer, Paul, and Dave all attend a lecture by Lorenzo Marcus and find themselves invited for a private drink with the mysterious academic and his assistant. Marcus wastes little time in revealing himself as a mage named Loren Silvercloak from another realm—Fionavar, the first world created by the Weaver—who has been sent to collect willing travellers from our world to attend an auspicious anniversary of the Kingdom of Paras Derval in Fionavar. Kim, Kevin, Jennifer, Paul, and Dave agree in quite short order—their few qualms explained away by Marcus or by each other. There is little time spent with these characters in their own world, and the reader is destined to learn about them in the grand and unfamiliar world of Fionavar.

Kim, Kevin, Jennifer, Paul, and Dave are held together by varying degrees of friendship. Kim and Jennifer are close friends and roommates. Kevin and Paul are close, but there has clearly been some recent tear to their relationship that they are both still navigating. And Dave feels himself the outsider in any group, including his own family. These relationships continue even in the wild adventures they find in Fionavar, and strengthen, morph, and break on deeply personal levels.

A major point of my admiration for Kay is that he has always created stories that have an epic scope, but with intensely personal stakes. In the overwhelming battle between Light and Dark, it’s individual happiness any reader of Kay’s works becomes most attached to. I never just want the world as a whole to survive: I want Kim to find some solace in the burden of her destiny, I want Kevin to find someone who will be as unfailingly kind to him as he is to everyone else, I want Dave to find somewhere to call home. I want to give Paul a hug. And I feel completely emotionally unequipped to give Jennifer any sort of comfort for the multitude of pains she has faced. This caring character creation doesn’t end at our fellow earthlings. A whole cast of good and strong and brave characters bloom from all the turnings that befall Fionavar, a fellowship of mages, princes, dwarves, Elf-like lios alfar, horse lords, and demi-gods.

Most hated by the Dark, for their name is Light.

It is no surprise that Loren’s selection of his earthly travellers was far from random. Among them are destinies that the realm of Fionavar desperately needs. Despite the celebrations at hand, Kim, Kevin, Jennifer, Paul, and Dave discover a world on the brink of not only drought and strife, but a darkness that has not been known there in over a thousand years. A darkness that could threaten all of the Weaver’s creations, including their own world.

Spirituality, romance, friendship, and bravery have as much a pull on the characters as destiny and war, often with painful dilemmas to be navigated; every fortunate turn of the tide comes with a price. While I certainly enjoy the occasional piece of grimdark fiction, it’s the goodness of characters that often has the biggest effect on me. I like having someone to root for, characters to care about not just in spite of their faults and their transgressions, but because they are good people trying to do the right things to fix their broken relationships, offer help where it is needed, and triumph over evil.

I don’t mean for this to descend into the tired comparison of “this book is like Lord of the Rings because” discussion, but Kay was an editor for The Silmarillion, so I think if any author bears comparing to Tolkien, it’s Kay. And he’s one of the few fantasy authors who doesn’t suffer in the comparison. The Fionavar Tapestry is about a world facing a battle of good and evil, but it’s also about the individuals who find themselves being drawn deeper into that fight than they may have ever imagined. A king stepping out of exile to claim his destiny not only for his ambition, but for the people who need someone to follow. Immortal beings of light facing what it means to be part of the world of mortal men, to not flee for their own protection, but to stand shoulder-to-shoulder and fight. Ordinary people stepping forward into terrible and dangerous positions just because it was the right thing to do.

Any of this sound familiar? And for all the feelings Lord of the Rings gave me, The Fionavar Tapestry gave me tenfold more. There’s an extra twist of the knife to a few of Tolkien’s more painful themes, and Kay is much more ruthless—I word I hesitate to use, since the heartbreaking moments of Fionavar are far from manipulative, but there are a lot of heartbreaking moments. I cried twice, and was left in shock many more times; yet the moments that perhaps hurt the most were the ones that seemed inevitable, long roads that could have only ended in tragedy.

We salvage what we can, what truly matters to us, even at the gates of despair.

Portal fantasy is one of those things that, as a longtime fantasy lover, I have practiced in my head since I was eight years old. I wanted to insert myself into Jim Henson’s Labyrinth. I wanted to go to Middle Earth. I still hope that every time I visit an old house I might find an inauspicious wardrobe that is not what it seems. The Fionavar Tapestry was everything I could have wanted in an adult weaving of these childhood fantasies.