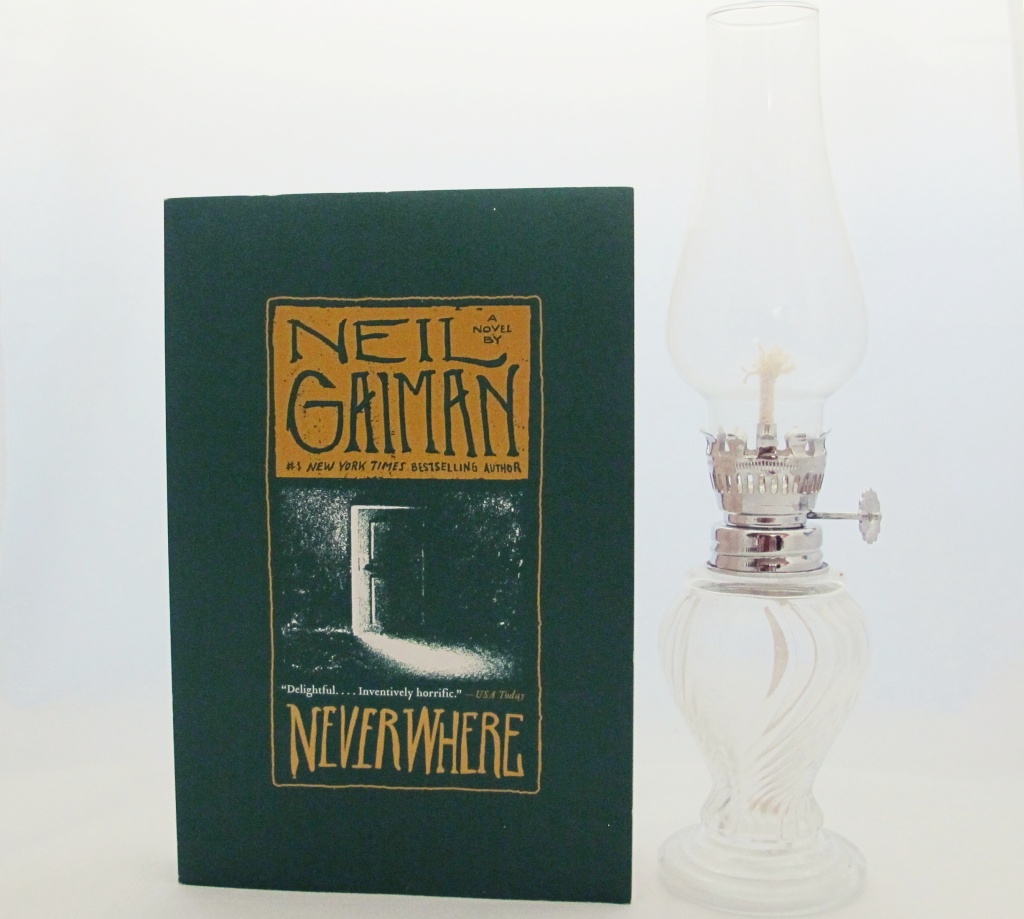 Every book has a story: I distinctly remember being quite young and perusing the bookstore, and on several occasions picking up a certain book and reading the synopsis on the back: a young man finds a young woman bleeding on a London street. I didn’t know who Neil Gaiman was (yet) and even though I looked at the book again and again, it was not one of the hundreds I ever got my parents to buy for me. As the years passed and I not only found out who Neil Gaiman was but became a crazy fan, I had it in mind that I really should read Neverwhere. I could hardly call myself a Neil Gaiman fan without having read it, could I? Well, I did anyway. For several years, I was a Neil Gaiman fan poseur. But no longer!

The night before he went to London, Richard Mayhew was not enjoying himself.

Despite the fact that I live in a world and amongst a nerdy people who have basically accepted Neil Gaiman as our benevolent overlord, I didn’t know much more about Neverwhere beyond “a young man finds a young woman bleeding on a London street.” And he did! But that was pretty early on, and the plot quickly moved on to explore London Below.

The young man in question, Richard Mayhew, finds the bloodied young woman, Door, indeed on a London street and takes her to his home in an offer to patch her up. This basically decent and seemingly innocuous thing, though, invites Richard into a world with magic and darkness and angels and the Marquis de Carabas. They are all denizens of the world of London Below, a land made up of the forgotten and discarded bits and buildings and people of London Above. Door is trying to solve the mystery of her family’s murders, Hunter is her formidable bodyguard, the aforementioned Marquis is the sometimes-leader, sometimes-liar, and Richard is along for the ride.

I’ll never know reading Neverwhere any other way, but I have to say that it was quite delightful to move through both London Above and London Below and be familiar with London myself. And now I’ll never be able to separate Earl’s Court Station from the image of the Earl himself.

By comparison to the rest of the Neil Gaiman oeuvre, Neverwhere was not as heavy as The Ocean at the End of the Lane nor as daunting as American Gods. I think what it brought most to mind was Stardust in its “whoop, here we go on an adventure!” kind of way. But what Neverwhere most reminded me of was Labyrinth. Yes, the movie with Jennifer Connelly and David Bowie and all the puppets to haunt your dreams.

In Neverwhere, we are not meant to ask questions of backstory and deeper motive and more subplots and all these things. We are just meant to go along for the ride. Take the explanations as they are given, believe in everyone’s causes for action, but trust no one. Lean on your “everyman” protagonist as your guide. Just enjoy getting dropped in the labyrinth and try to find your way out.

(I have to say, so far as this comparison goes, Jareth the Goblin King > Angel Islington.)

(Jareth the Goblin King > everyone.)

When Richard finally returns to his life in London Above, where he doesn’t have to scream for his life every twenty minutes or thrash in sewer water or run headlong into the dark, he misses his adventures in London Below. When he finally makes his choice to leave behind all the cushiness and comfort of London Above and steps through the door with the Marquis de Carabas, I imagined that they joined Door in her room for a dance party with the complete cast of the book, rocking out to “Magic Dance.”

And not only was Neverwhere all these wonderful things, it was also just the palate-cleanser I needed after the disappointments of The Mists of Avalon and Hild. Sometimes I can forego the politics and the grimdark and the historical accuracy and really just sit back and enjoy a simple adventure.